In honor of the upcoming NFL season, here's a great photo from two summers ago. The kids and Auntie Annie. Beast Mode! 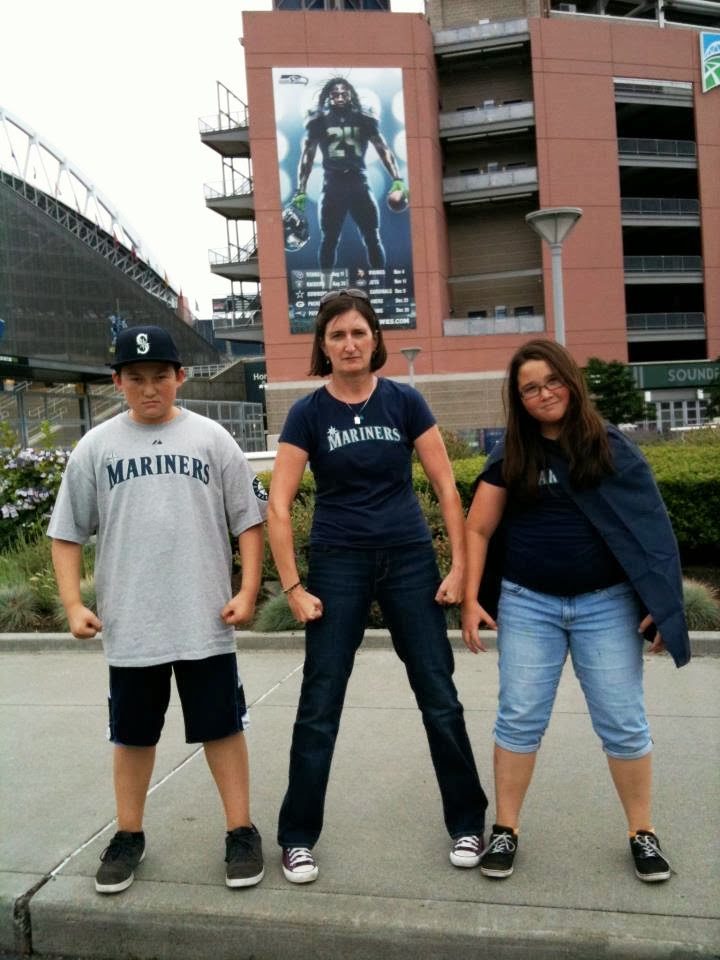 Here's a smaller version that we're using for our fantasy football team. 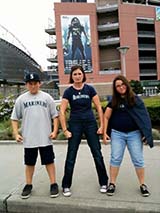 A post on Slate’s news summary, “Slatest,” warns of the increasingly aggressive nature of South Africa’s baboons. It seems that more than 400 baboons have organized themselves into gangs and are ransacking cars, causing officials to worry about the threat to tourism in Cape Town during next year’s World Cup. The AP reports that a baboon called “Fred” opened “unlocked doors and jumped through windows to search for food.” Slate continues wraps up its summary as follows: “City officials fear that as monkeys grow more aggressive, non-English speaking visitors will be their first targets. ‘Tourism is going to go through the roof, and this equals exposure to naive people and rich pickings,’ a baboon researcher said. ‘People who stop the car, they're going to get raided.’”

Maybe Caroline and Annie, ESL teachers extraordinaire, can turn the threat of Baboon bias into an international teaching opportunity.

(The AP account, which is quite interesting, describes how city residents have asked for signage in many languages in order to warn tourists about the dangers of these wild animals. Slate omits this part in its summary.)

Is there justice in our land?

Here are two reasons that make me believe that the answer is no:

1. Prof. Henry Louis Gates, Jr. the director of Harvard's W.E.B. DuBois Institute for African and African American Studies, was arrested outside of his home in Cambridge, MA. His crime? He was locked out of his house after a trip to China. The lock on the front door was jammed so he attempted to force the door open. The police responded to a phone call reporting two black men trying to break into a house, arrested him, and charged him with disorderly conduct. There are many things one could write to describe the situation, but Prof. Gates says it best: "There are one million black men in jail in this country and last Thursday I was one of them...This is outrageous and that this is how poor black men across the country are treated everyday in the criminal justice system. It's one thing to write about it, but altogether another to experience it." Read the article in the Washington Post.

2. Gov. Schwarzenegger may be smiling after his budget agreement, but is cutting services to seniors and children a good thing? Yes, California has a bloated budget. Yes, we are living in complex times where the federal, state, and local governments can't meet every need. But should we celebrate cutting access to health care? Is it reasonable to smile when the once vaunted California education system faces massive cuts? See the picture and read the article (LAT)

As the psalmist says, "May our sons in their youth be like plants full grown, our daughters like corner pillars cut for the structure of a palace; may our granaries be full, providing all kinds of produce;... may there be no cry of distress in our streets! Blessed are the people to whom such blessings fall!" (Psalm 144: 12-14) I echo that prayer for our state and for our nation.

Overheard Recently on the Train

Here's the link to the interview with Don E. Miller in Books and Culture (www.booksandculture.com).

Gerardo Marti, a good guy, professor at Davidson College, and former visiting scholar at the Center for Religion and Civic Culture, posted his take on the interview here: http://praxishabitus.blogspot.com/. "In the course of conducting a sweeping study of Global Pentecostalism,Don Miller changed," he writes. "He went from being cynical to a sympathetic in his analytical stance. In the process, he proposes that social scientists take into account the ‘S Factor’ in studying religion.”

The other night, apropos of nothing, Daniel began to outline his future career. "After I graduate from college, I'll be 22," he said, "And then I'll play baseball." At the end of an 18-year career in the majors he’d hang up his cleats. (He estimated that he'd earn $20 million a season.) Since he will have completed law school in the off season, he will ready to launch his political career. Following terms as governor of California and President of the United States, he would then consider a return to baseball as a manager. "I'll probably retire after that," he said.

A quizzical look appeared on Lucy’s face."Then when will you become a librarian?" she asked.

(Our kids love librarians, especially their Great Aunt Lucia. Lucy is still considering the options. She's not sure whether to become a librarian, an illustrator, a writer, or a teacher.)

Daniel just stirred in his sleep and said, "Hmmm. Nothing to do."

It was my turn to say goodnight to Lucy. She asked me why it was always "so short" when I said goodnight. "You just pray and then sing, and then it's over. When mom says goodnight, I ask her questions..." She rattled off a list of tough questions, the last one of which was, "Why are we alive?"

The "S" Factor in Books and Culture

At long last, my interview with Donald Miller (the sociologist, not the author of Blue Like Jazz) appeared in Books and Culture. The interview isn't online yet, but check the site in the coming weeks.